With the band having nearly finished the recording of the Sentinel with Eddie Offord at his East Point Atlanta studios the deal with EMI was confirmed and it was arranged for reporter Chris Watts and photographer Robert Ellis to fly over to meet the band for a major feature in Kerrang Magazine, cover date November 1983. 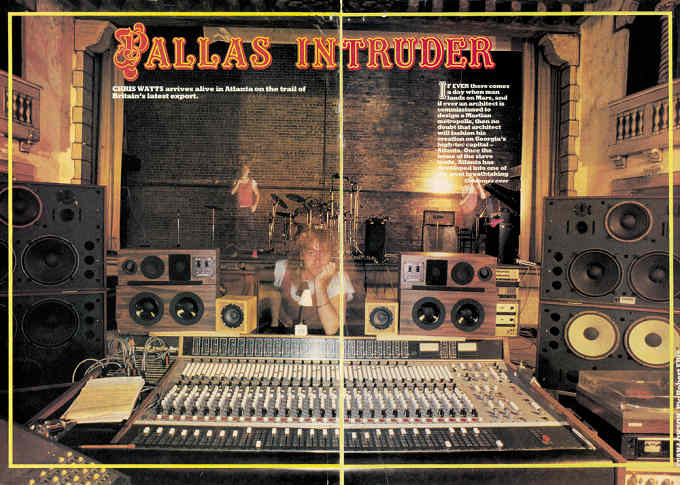 If ever there comes a day when man lands on Mars, and if ever an architect is commissioned to design a Martian metropolis, then no doubt that architect will fashion his creation on Georgia's hi-tec capital - Atlanta. Once the home of the slave trade, Atlanta has developed into one of the most breathtaking cities ever built, with an eye for the most seemingly impossible structures of glass and steel, not to mention little podules which pass for lifts that shoot up and down the exterior walls of hotels and restaurants with no regards for queasy stomachs...a perfect and total fantasy city for the rich and playful. It's an Alan Parson's album cover in broad detail, a city of swimming pools.

Taking the interstate 75/85 highway south, past verges of painted grass and the never ending line of motor-diners,past Atlanta's sci-fi airport with it's own underground system, and onto the sleepy suburb of Hapeville with the airport runways at the back of it's collective garden, you will find NOISE. Not the pedestrian rock of 96FM radio, but an earthy rumble coming from East Point Studios, a mere stone's thrown from the glitter and concrete of downtown. Hapeville could hardly be described as the most decorous town in the state; it's your average motel/drug store/high school settlement with the atmosphere of a 1960's teenage cult movie.

East Point Studios are something of a mystery to the locals. "Hey, boy, there some band playin', you let us know y'hear! is a frequent greeting from the dozy candy - store owner with a sign on her wall saying: "We're not worried by shop-lifters because thieves will be punished by God"; and looking like six surrogate James Deans, Pallas lounge in the sun outside the deserted '50s movie house now converted into a fully-functional 24-track by the diminutive Eddie Offord, a noted producer with a track record as long as he is short......

Despite East Point looking thoroughly empty and more than a little eerie from the outside, due no doubt to it's once gaudy and now faded billboards and central ticket box, inside the shell is a mass of machinery. With the 300 odd sets still bolted down and the cathedral bannisters and railings intact you could be forgiven for thinking that this had been an evil hoax conceived by these five jovial Scotsmen, the sixth being their road manager/backbone and cook Mike. But, on catching sight of the desk, tapes, flickering LEDs,mikes and all the other studio paraphernalia, it becomes obvious that this is very,very real.

The "stage" becomes the recording booth, the orchestra pit the control room, the balconies the site for the guitar cabs; the musty hall slowly evolves from 1950 to 1990. Like a proud father,Eddie swivels around in his chair and beckons the band to work for some backing vocal dubs, whipping the Pallas album into shape before these, by now thoroughly jet-lagged, ears.

The reason why a fairly unknown - in commercial terms - group of Prog Rockers should be recoding their first 'real' album 6000 miles from their native Aberdeen without a record company is really quite simple. Honest. Eddie Offord....

"You see, we sent some tapes out here to Eddie", begins bassist and Backing vocalist Graeme Murray, "and he was impressed. We'd always wanted to work with him after hearing the stuff he'd done in the past with Yes and Emerson Lake and Palmer, and it actually works out cheaper for us to come over here and record in Eddie's studio than it would to bring him to Scotland, because he only works in one studio in the UK, and that's miles away. We were obviously on a very limited budget and Eddie offered us a very good deal."

They now have a clandestine record contract, the details of which they had been sworn on the pain of death not to reveal by the executives from the company in question, referred to as the "WeatherMen". The company - EMI

The "Weather Men" obviously saw the potential of Pallas ,and, on listening to the entire album in its rough - mix state, it's not difficult to understand that potential. Pallas are a brave band - unfairly heralded as "Progressive" - with an edge. Their music is complex yet refreshingly clean-cut and uncluttered, and an ability to laugh through the songs, complicated and proficient though they may be, is an appealing and worthy talent.

They're not just another Genesis or Steve Howe; this is music delighting in the fields of fantasy and harmless escapism. As entertaining and "readable" as "Lord of the Rings" - a musical "Star Wars"comments Graeme, chuckling to the playback of skinsman Derek Forman thundering up an adjacent flight of stairs for a track entitled "Cut & Run". a spy - spoof based on corny Bond themes but enjoyable nonetheless. "Balls!" echoes Derek's voice through the monitors as he stumbles over the threshold unaware that the "studio" is picking up his every murmur. This band can laugh at things, themselves included. Even when their car is towed away whilst they're out on a photo shoot (for illegal parking on a rainy Sunday afternoon) and $50 worth of food money goes speedily into the traffic cop's hand in exchange for the vehicle, they see the funny side."Balls!" says Derek to no - one in particular.

The image of a Progressive Band in England is not a healthy one, and an unknown one in Georgia. A picture of righteous martyrdom, heavy handed epics and opuses revolving stages and accepted musicians over the age of 45 is the norm - an image that Pallas do not conform to musically of visually. There is no box for the band as guitarist Niall Mathewson explains: "We have been playing this type of music for quite a time now and if people didn't want it then we could not have continued, we know that they are there."

"Progressive Rock is an easy pigeon-hole" comments vocalist Euan Lowson,"Progressive Rock does not exist anymore; Progressive, or what was once called progressive was the music that some of the band grew up with in the '70s. There are no ready-made labels for this group.

"None of the bands that you and I know we are talking about," chips in the suave Ronnie Brown, "would honestly admit to being part of the Progressive movement. They're embarrassed about the misconception that immediately springs to mind when folk mention "Progressive". Bands haven't been given the chance to be heard as individuals."

Having been temporarily taken under Eddie's wing and having been exposed to the American market, Pallas have benefitted greatly in musical terms. Anyone in possession of the band's decidedly dodgy "Arrive Alive" self-produced album will notice a remarkable leap. Whereas "Arrive Alive" was barely above the turgid level, this new platter is a cohesive collection of lenght and breadth, from the might of "Ark of Infinity" and "Atlantis" to the snappy single orientated material including "Shock Treatment and a re-working of "Arrive Alive" itself - the latter under scrutiny for possible single material. It's an album of variation; given the time and money to experiment slightly Pallas have uncovered a rare tomb of gold.

The music is custom-designed for drummers; I can still remember Derek bravely grappling with the intricacies of a Simmons kit. He drives the band aided and abetted by the true grit of Niall's guitar. Not for Pallas the candy floss and cotton wool of similar outfits, the emphasis here is on ROCK rather than progressive.

"A lot of people seem to think that we are restricted by a lack of image" says Euan, "but music should not be a fashion or a movement. We don't want to go and get "Woody Woodpecker" haircuts' to sell records - that's why the press doesn't like us, those people slamming us for being "Progressive" are the ones worried about showing their real age! I dont see why people who don't like us can't just turn around and go and listen to something else instead of lumping us all together and saying were all s**t. This is music that people can go and watch if they want to watch. No - one's forcing them." 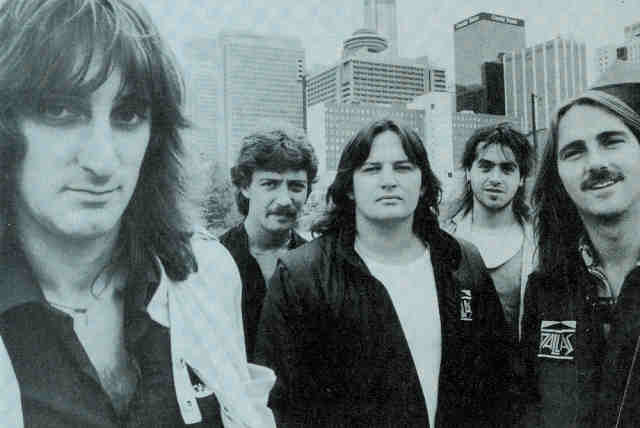 "People seem to think that Progressive music is cold" adds Ronnie, "but I like to think that we can appeal to every emotion, not just anger or suchlike, we have sad bits, happy bits, bits to jump around to. It's different people now, different times."

And time that Pallas were accepted as individuals, and not just as a limb from a collective tree.

"When we first started" continues Ronnie,"our immedaite aim was to present a show that would be interesting to watch and interesting to listen to. That's all we've ever done - just because we've had a visit from the "Weather Men" I can't see that changing.

"Atlantis", as the album is tentatively titled, sees Pallas poised and confident - and alone...."Everybody obviously misses home a great deal." says Euan."But then again it had to be done. If you want to, dare I say it, progress, you've got to boldly go..... from a professional viewpoint though, It's been very advantageous, just to be exposed to such a situation.

I left Atlanta - with Pallas looking forward to a farewell supper of Cornflakes and orange juice because the "Weather Men" had forgotten to bank thier advance - in the knowledge that England is in some small way about to be taken by storm. In one of their spoken passages on the album perhaps they reveal more than they meant at the time:

"Forgive us, for we know not what we have done"