After many months of hassling 'Kerrang' the band recieved its' first full page feature, by Malcom Dome issued dated December 18 1982. 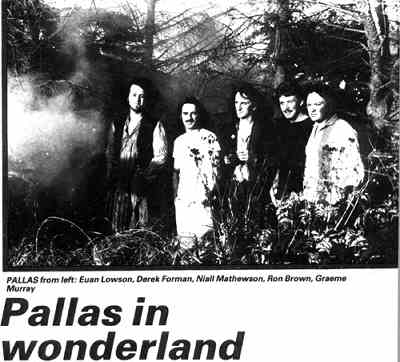 One Swallow, my friends does NOT make a musical movement. But it seems, according to some, that we are now in the throes of a new era of British progressive rock (the birth of NEOBPR?) - a fact primarily based on the emergence of Aylesbury quintet Marillion.

Much as I admire Fish and the fellas, I can't help feeling that they are most certainly NOT the harbingers of a new dawn for mature, heavy musicianship a la Yes, ELP, Genesis, King Crimson etc. True Marillion now have an EMI deal, but what the heck does that prove? Only that they're a band with all the right ingredients of luck, talent, and connections - nothing more.

The 'prog tock' movement is no nearer happening, and will remain thus until a steady stream of similar sophisticates firstly start regularly gigging, secondly gain wide media exposure, and thirdly sign on the dotted record contract line. As yet, there aren't too many contenders to pass the post on any (let alone all) the above criteria.

Marillion aside, the sole ray of sunshine on the horizon is Aberdonian five piece Pallas, and even they've got a long way to go before they're ready to compete with any degree of confidence in the dangerously uncertain world of big-time rock. At the moment too much of their Yes/Rush style music consists of over-long epics that tend to drag, and run the risk of losing the listeners interest as 'Arrive Alive', their self-financed cassette release on Granite Wax Records, shows.

But, equally let's not lose sight of two pertinent facts regarding Pallas. Firstly, they've been together some five years - a mere drop in the time ocean for such a musically - demanding genre. And, secondly, the aforementioned cassette was cheaply produced fron ONE Scots gig - not exactly the best way to make your recording debut. Furthermore, it has picked up respectable sales, and some critical acclaim.

No less a judge than Bernie Marsden was moved to comment that the title track (also issued as a Granite Wax single) was "interesting . . . certainly a little different from your average headbanging record." And numbers like 'Queen Of The Deep' and 'Crown Of Thorns' (the only songs still performed live by Pallas from the cassette) do indeed balance light/shade, hardedged power/gentle introspection in a way that shows the band have the right to feel for prog rock. Moreover, they're sensible enough to admit they've much to learn.

"Oh yeah, we all know there's room for improvement on the technical side," says bassist Graeme Murray (the group is completed by vocalist Euan Lowson, guitarist Niall Mathewson keyboard player, Ronnie Brown and drummer Derek Forman). "But we're all musical perfectionists, forever trying to get better individually and collectively, and no-one has yet come up to us at gigs and said: 'well, you're not technically good enough'. The reason for that is simple. Most of our fans are 17/18 year olds who never saw Yes or ELP in their heyday, cos at the time they were eating lollipops and reading comics. So, when they come to see us, it's a fresh experience, something that's completely new to them.

"  It's not surprising that Pallas fans (virgins in prog rock territory) find the band so invigorating for like Marillion, they put on a highly theatrical show.

"You can only jump up and down and shake your head to music for so long. After that it becomes boring, and our style is so intense and dynamic it seemed a shame not to exploit the visual possibilities. So, we use theatrics of a sort that will AUGMENT the music."

Wherever you turn in this feature, however, one inescapable word keeps popping up- MARILLION! Aren't Pallas in danger of becoming labelled as a copy of their Aylesbury peers? Graeme Murray :- "Yes, there are possibly some people who think we're like Marillion. But once they see both bands perform, they can't fail to realise how much we differ from one another. Our music does have similar roots, but we've grown apart. And theatrically we're also different 'cos our frontman, Euan and Fish, are totally separate personalities. It's rather like comparing Alice Cooper with Peter Gabriel. I'm not saying these are the prime influences on our respective singers, simply that although Gabriel and Cooper drew from the same theatrical roots, they were vastly different in their interpretations.  "

I believe there's plenty of room for both bands in the modern rockfield. No-one ever tried to call ELP a copy of Yes, did they? Or Yes a copy of Genesis. No, we're just a couple of individual bands, each with it's own sound. In fact, as people, Marillion and Pallas get on very well. We do our utmost to promote one another. Maybe in a few years time, when we're both trying to push LPs up the charts, things will change. But at the moment, it's mutually beneficial for us to help each other out."  Despite Murray's optimism, I can't help but wonder if our major labels, having seen Marillion snapped up, will start to court Pallas for all the wrong reasons in the same way that Def Leppard's Phonogram contract led to a stampede of NWOBHM outfits being signed up, and viewed as Leppard clones.

"Oh I don't think there's any danger of that", retorts Murray. "We haven't struggled this far just to blow it by going to the wrong label. We're wise enough to wait for the right deal."

Bold words. And I hope Pallas can stick to them. Certainly tempting offers seem to be just around the corner with many companies, who disdainfully turned away the Pallas begging bowl only a year ago, now given to phoning the band, trying desperately to re-open negotiations.

But, the biggest question of all still remains open. Have the band (or for that matter Marillion) REALLY the ingenuity, presence of mind and charisma to build a lasting nationwide reputation? Or are we just deluding ourselves if we think that young audiences responding to high-class musicianship in new bands shows anything more than a novelty interest. For the sake of the potential inherent in both Marillion and Pallas, I pray that there is no record company/ media attempt to artificially create a NEOBPR.

With this proviso in mind, I believe the future for Pallas to be more positive than negative. And any band who can openly admit to having written a hitherto unrecorded concept album's worth of material based around the 'Legend Of Atlantis' (as have Pallas), have got my vote right from the start.