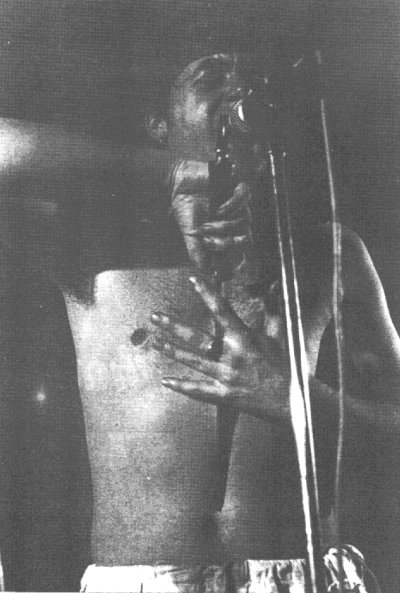 Well, 'twas the return of the conquering heroes (a common occurence in Aberdeen, these days!) for Pallas's last Scottish date ebfore heading off for the other side of the Atlantic. And no finer parting gift could there have been.

Previewing new songs and costumes, the sound was good and the musicianship its usual high standard. The only grumble was the sound problems due to Euan's faulty headset.

The customary "Thunderbirds" theme opened the show, and the proceedings proper were commenced with the new number Cut And Run. A "Bladerunner"-esque aura was enhanced by Euan's detective style trench coat and bashed homburg hat.

This was swiftly followed by an impeccable rendition of the singe Paris Is Burning (how I wish they would still include the B-side in their set - the poignant The Hammer Falls).

Next song on the agenda was yet another addition to the Atlantis meisterwerk, The Ark Of Infinity (my my, how pretentious!), which tells of the voyage by spacecraft away from the Earth's destruction. As a matter of interest, whatever happened to In The Cell, East West, and Calm Before The Storm!

The now classic Crown Of Thorns followed in all its powerful beauty, and this segued into another new Atlantean number, Rise And Fall. This time, Euan took his place as a warrior in cloak and armour, clutching a silver battle axe. Each of these new additions are equally impressive, now with the distinctive Pallas hallmark on it.

They hardly seemed to draw breath before launching into the driving, insistent March On Atlantis. Young Mr. Mathewson becomes more and more like a certain R. Blackmore in his actions as time goes on, from being the quiet man of the group, he now whirls about the stage like a man possessed classic guitar hero stuff, this! Graeme Murray's bass playing and Derek Forman's drumming remains as impressive as ever, as is Ronnie Brown's keyboard work.

The familiar keyboard opening to Atlantis rang out and Armageddon had begun (or so it seemed to the uninitiated among our number!). The performance was faultless, climaxing in a blaze of white lights and flashbombs (stirring stuff, this!).

The roar of approval which followed, would almost have put the hordes at Pittodrie to shame!

The first encore was the old live favourite The Ripper. Graeme's pure vocals set the scene for us before a hunched figure in a dirty raincoat and old man mask (very Gabrielesque!) appeared. The instrumental sections allowed Niall to indulge in some more Eastern-flavoured Blackmoreisms. Euan contorted his body about the stage whilsts carrying out psychotic vocals and screams. He removed the mask to reveal a white-painted face, before "cutting" his throat. (Some poor faint-hearted soul fainted at this point!)

The second encore was a lively extended version of Arrive Alive, Euan leaving the stage to leap about on the dance floor with the audience.

Well, Pallas have come a long way since those Saturday lunchtimes at the Dial Inn or the Aberdeen Bowl. Today, Aberdeen... tomorrow, the world!!