The Sentinel Track By Track

The Sentinel Track By Track

In this feature, from the Jan 1984 issue of "the Sentinel" newsletter the members of the band run through the tracks on the album. 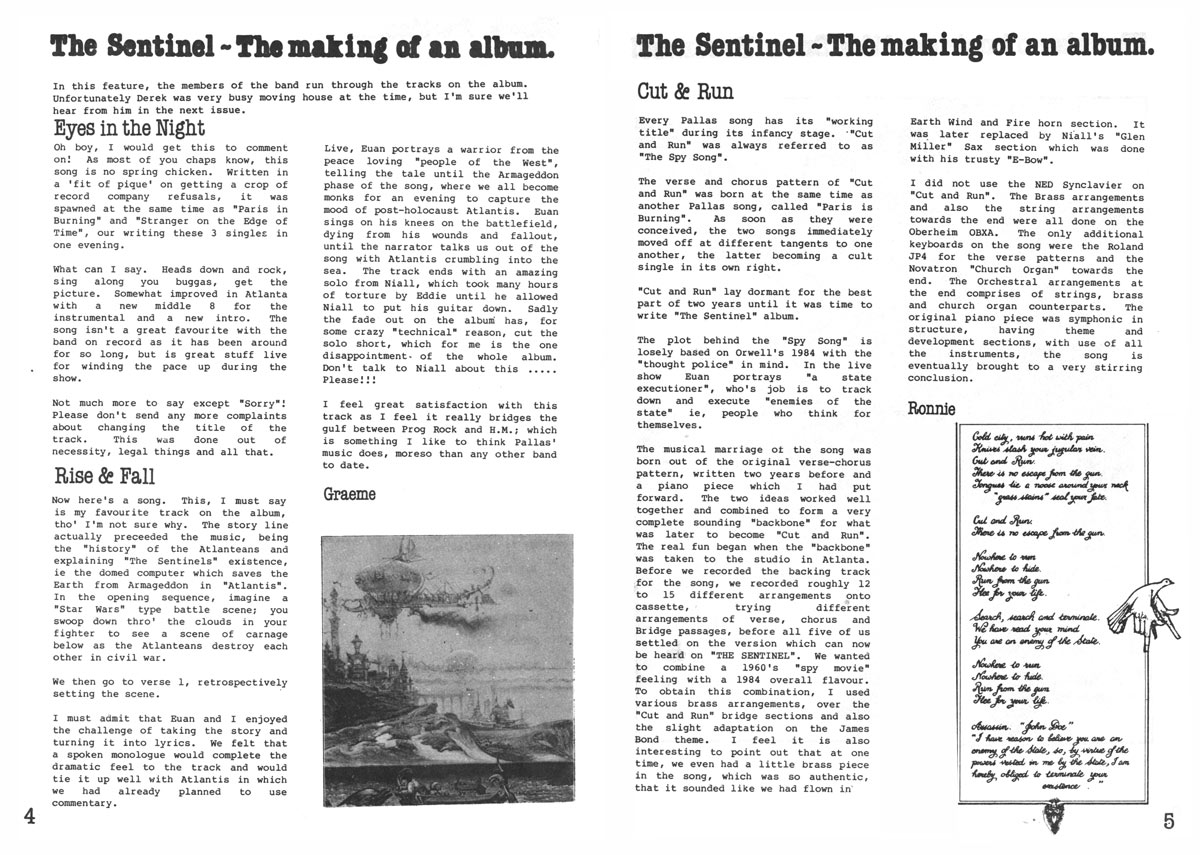 Eyes in the Night

Oh boy, I would get this to comment on! As most of you chaps know, this song is no spring chicken. Written in a 'fit of pique' on getting a crop of record company refusals, it was spawned at the same time as "Paris in Burning" and "Stranger on the Edge of Time", our writing these 3 singles in one evening.

What can I say? Heads down and rock, sing along you buggas, get the picture. Somewhat improved in Atlanta with a new middle 8 for the instrumental and a new intro. The song isn't a great favourite with the band on record as it has been around for so long, but is great stuff live for winding the pace up during the show.

Not much more to say except "Sorry"! Please don't send any more complaints about changing the title of the track. This was done out of necessity, legal things and all that.

Now here's a song. This, I must say is my favourite track on the album, though' I'm not sure why. The story line actually preceded the music, being the "history" of the Atlanteans and explaining "The Sentinels'" existence, i.e. the domed computer that saves the Earth from Armageddon in "Atlantis". In the opening sequence, imagine a "Star Wars" type battle scene; you swoop down thro' the clouds in your fighter to see a scene of carnage below as the Atlanteans destroy each other in civil war. We then go to verse 1, retrospectively setting the scene.

I must admit that Euan and I enjoyed the challenge of taking the story and turning it into lyrics. We felt that a spoken monologue would complete the dramatic feel to the track and would tie it up well with Atlantis in which we had already planned to use commentary.

Live, Euan portrays a warrior from the peace loving "people of the West", telling the tale until the Armageddon phase of the song, where we all become monks for an evening to capture the mood of post-holocaust Atlantis. Euan sings on his knees on the battlefield, dying from his wounds and fallout, until the narrator talks us out of the song with Atlantis crumbling into the sea.

The track ends with an amazing solo from Niall, which took many hours of torture by Eddie until he allowed Niall to put his guitar down. Sadly the fade out on the album has, for some crazy "technical" reason, cut the solo short, which for me is the one disappointment' of the whole album. Don't talk to Niall about this..... Please!!!

I feel great satisfaction with this track as I feel it really bridges the gulf between Prog Rock and H.M.; which is something I like to think Pallas' music does, moreso than any other band to date.

Every Pallas song has its "working title" during its infancy stage. "Cut and Run" was always referred to as "The Spy Song".

The verse and chorus pattern of "Cut and Run" was born at the same time as another Pallas song, called "Paris is Burning". As soon as they were conceived, the two songs immediately moved off at different tangents to one another, the latter becoming a single in its own right.

"Cut and Run" lay dormant for the best part of two years until it was time to write "The Sentinel" album.

The plot behind the "spy Song" is loosely based on Orwell's l984 with the "thought police" in mind. In the live show Euan portrays "a state executioner", who's job is to track down and execute "enemies of the state" i.e., people who think for themselves.

The musical marriage of the song was born out of the original verse-chorus pattern, written two years before and a piano piece which I had put forward. The two ideas worked well together and combined to form a very complete sounding "backbone" for what was later to become "Cut and Run". The real fun began when the "backbone" was taken to the studio in Atlanta. Before we recorded the backing track for the song, we recorded roughly 12 to 15 different arrangements onto cassette, trying different arrangements of verse, chorus and Bridge passages, before all five of us settled on the version which can now be heard on "THE SENTINEL". We wanted to combine a 1960's "spy movie" feeling with a 1984 overall flavour. To obtain this combination, I used various brass arrangements, over the "Cut and Run" bridge sections and also the slight adaptation on the James Bond theme. I feel it is also interesting to point out that at one time, we even had a little brass piece in the song, which was so authentic, that it sounded like we had flown in Earth Wind and Fire horn section. It was later replaced by Niall's "Glen Miller" Sax section, which was done with his trusty "E-Bow".

I did not use the NED Synclavier on "Cut and Run". The Brass arrangements and also the string arrangements towards the end were all done on the Oberheim OBXA. The only additional keyboards on the song were the Roland JP4 for the verse patterns and the Novatron "Church Organ" towards the end. The Orchestral arrangement at the end comprises of strings, brass and church organ counterparts. The original piano piece was symphonic in structure, having theme and development sections, with use of all the instruments; the song is eventually brought to a very stirring conclusion. 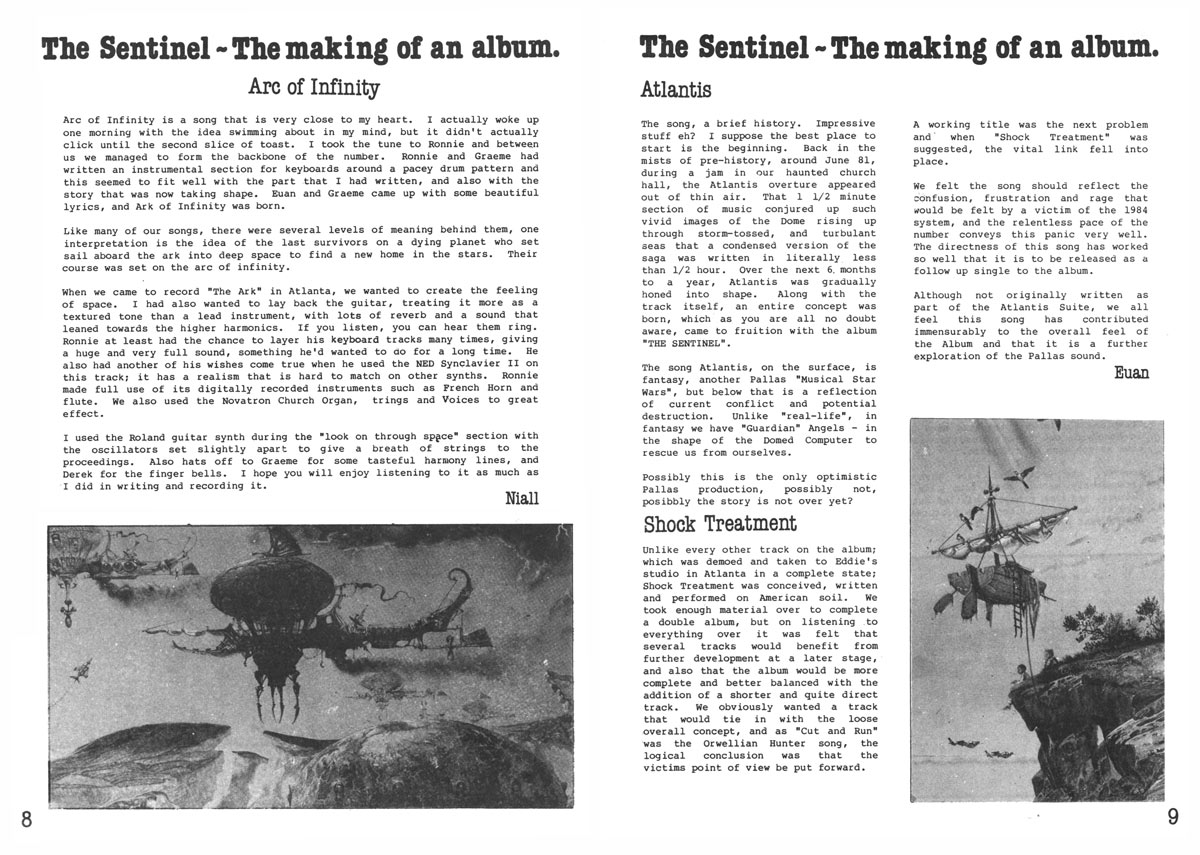 Arc of Infinity is a song that is very close to my heart. I actually woke up one morning with the idea swimming about in my mind, but it didn't actually click until the second slice of toast. I took the tune to Ronnie and between us we managed to form the backbone of the number. Ronnie and Graeme had written an instrumental section for keyboards around a pacey drum pattern and this seemed to fit well with the part that I had written, and also with the story that was now taking shape. Euan and Graeme came up with some beautiful lyrics, and Ark of Infinity was born.

Like many of our songs, there were several levels of meaning behind them, one interpretation is the idea of the last survivors on a dying planet who set sail aboard the ark into deep space to find a new home in the stars. Their course was set on the arc of infinity.

When we came to record "The Ark" in Atlanta, we wanted to create the feeling of space. I had also wanted to lay back the guitar, treating it more as a textured tone than a lead instrument, with lots of reverb and a sound that leaned towards the higher harmonics. If you listen, you can hear them ring. Ronnie at least had the chance to layer his keyboard tracks many times, giving a huge and very full sound, something he'd wanted to do for a long time. He also had another of his wishes come true when he used the NED Synclavier II on this track; it has a realism that is hard to match on other synths. Ronnie made full use of its digitally recorded instruments such as French Horn and flute. We also used the Novatron Church Organ, strings and Voices to great effect.

I used the Roland guitar synth during the "look on through space" section with the oscillators set slightly apart to give a breath of strings to the proceedings. Also hats off to Graeme for some tasteful harmony lines, and Derek for the finger bells. I hope you will enjoy listening to it as much as I did in writing and recording it.

The song, a brief history. Impressive stuff eh? I suppose the best place to start is the beginning. Back in the mists of pre-history, around June 81, during a jam in our haunted church hall, the Atlantis overture appeared out of thin air. That 1 and a half-minute section of music conjured up such vivid images of the Dome rising up through storm-tossed, and turbulent seas that a condensed version of the saga was written in literally less than 1/2 hour. Over the next 6 months to a year, Atlantis was gradually honed into shape. Along with the track itself, an entire concept was born, which as you are all no doubt aware, came to fruition with the album "THE SENTINEL".

The song Atlantis, on the surface, is fantasy, another Pallas "Musical Star Wars", but below that is a reflection of current conflict and potential destruction. Unlike "real-life", in fantasy we have "Guardian" Angels - in the shape of the Domed Computer to rescue us from ourselves.

Possibly this is the only optimistic Pallas production, possibly not, possibly the story is not over ..yet?

Unlike every other track on the album; which was demoed and taken to Eddie's studio in Atlanta in a complete state; Shock Treatment was conceived, written and performed on American soil. We took enough material over to complete a double album, but on listening to everything over it was felt that several tracks would benefit from further development at a later stage, and also that the album would be more complete and better balanced with the addition of a shorter and quite direct track.

We obviously wanted a track that would tie in with the loose overall concept, and as "Cut and Run" was the Orwellian Hunter song, the logical conclusion was that the victims point of view be put forward. A working title was the next problem and when "Shock Treatment" was suggested, the vital link fell into place.

We felt the song should reflect the confusion, frustration and rage that would be felt by a victim of the 1984 system, and the relentless pace of the number conveys this panic very well. The directness of this song has worked so well that it is to be released as a follow up single to the album.

Although not originally written as part of the Atlantis Suite, we all feel this song has contributed immeasurably to the overall feel of the Album and that it is a further exploration of the Pallas sound.