Pallas were interviewed by Derek Oliver at the start of their first Concert Hall tour for Melody Maker, cover date 4/4/84. 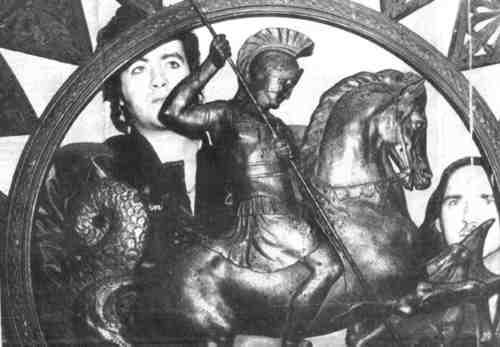 BEFORE we go any further, I'd better lay the cards face up on the table and state quite openly and proudly that Pallas are a progressive rock band. Yeah go on, turn the page if you must, hide your face in the acceptability of this week's fave rave, pretend that it's all some kind of passing Joke. A flick of the wrist would be the easiest remedy for all you level headed critics of dangerous, provocative pop. However, if challenges are required, then read on . . . music fans.

Admitting influences can often blight a flourishing reputation. Look what happened to Adam Ant when his dated respect for Alice Cooper crept out into the open. Heartfelt affection for past musical trends - stepping conveniently over the chic, baggy-suited-trad - jazz buffoons - is definitely treated as something approaching near lunacy. But why? Why should an appreciation of Barclay James Harvest, Greenslade, Peter Hamill, Henry Cow et al be scoffed at with such malign distaste? There probably isn't a universal reason: hip kids simply require hip trends and, if they bothered to think about it hard enough, hip trends (take a bow Mr. Businessman) require hip kids. Natural induction or corporate policy? The answer is visible but the eves are squinted.

Aberdeen is a long way from the Marquee, that I do know. As we pull up to the town's premier rock venue, the prestigious Capitol Theatre (don't laugh, the Stones played here a couple of years back) the wind is howling with more gusto than Thor blowing up a hot water bottle. Tonight's gig is something of a special occasion. No only is it their home town (the mums and dads were out in force) but it marks the end of one rather traumatic period for Pallas and heralds the start of a new and decidedly optimistic future.

The release of "The Sentinel" surprised many by its sense of urgency and maturity."Script For A Jester's Tear" the first new age prog-rock LP had set a high standard and for a time it looked like Marillion were struggling (read panicking) to produce an equally articulate follow up. Pallas's debut also had the distinct disadvantage of being produced on a shoestring budget - a consideration that became apparent when I eventually cornered bassist Graeme Murray. Although built like a mountain, Graeme is friendly and courteous.

"Ye Gods! It honestly frightens me to death when I think back. It came to the point after so many false promises from record companies where we just had to take the future into our own hands. We knew that our material had a big market, Marillion's album proved it, but the companies were still very reluctant to take a chance. So we had a meeting and decided that we could either split up or put every penny we had into the recording of 'The Sentinel'. I went home, thought about it in the evening and came back the following day with the same choice as everyone else.

"It was so frightening yet strangely exciting. We all knew that the music was good enough but to actually put ourselves on the line was the ultimate sacrifice. From there we started to sell everything that wasn't essential; equipment, cars, junk, anything that could raise a few pounds. Our manager and myself took our second mortgages on our houses and we managed to get an overdraft facility from the bank. It was unbelievable yet essential to our survival."

Apart from Graeme the rest of the band consists of vocalist and resident entertainment officer Evan Lowson, a warm and extremely crazed character. Guitarist Niall "Lentils" Mathewson, keyboard whizz Ronnie Brown and techno thwacker Derek Forman. Collectively one of the most likeable and panic-free bunch of characters ever to be gathered together under the shady banner of a progressive band.

Originally called Rainbow (until Ritchie Blackmore buggered that idea), Pallas have been in circulation for roughly eight years. The last three have seen them playing just about every nook and cranny in the UK to increasingly devoted audiences. At one stage not so long ago, they even allowed Marillion to support them on some Scottish dates in return for a similar favour down south.

With an increasing following bolstering the live shows and some prestigious London dates at The Marquee (where else?), the band felt it time to put out their own LP consisting of studio demos. At this stage Pallas and Marillion were spearheading the revival and it was becoming clear that sooner or later one of them was going to be picked up by a major label. Marillion won.

The comparisons are actively discouraged within the Pallas camp. The following day in Glasgow Euan Lowson stood his ground and put the following case to me."God, I hate those bloody comparisons. It springs from the press more than anyone else. The fans don't equate the two of us on that level at all and they are the people who count in the long run. The music press need to sell papers - they like glamorising and picking out what in their view are anomalies.

"It's also incorrect to say that we're following in Marillion's footsteps. If they bothered to investigate the histories of each band they'll find out that we've been around the longest, but Marillion always had the distinct advantage of being based in or near London. They got the deal first but I think it was simply down to exposure at that stage. We're definitely not jumping on a bandwagon and in a way I think we've a more underground band."

Armed with money pooled from the band, they undertook the recording of "The Sentinel" in Atlanta, Georgia, under the guidance of one time Yes knob-twiddler Eddie Offord - a man long lost to obscurity.

Graeme: "We decided that Eddie was the man for us although his whereabouts baffled everyone. Fortunately our manager Harry tracked him down and sent him the demo tapes and he loved it. Apparently he hasn't been so excited about anyone since his days with Yes.

"The Sentinel" is a particularly probing and complex set, both musically and Iyrically, fortunately, not in the same fashion as Fish's paean to personal relationships but of a more general nature.

Pivoting around the central theme of a world strangling itself to death by the threat of total war, " The Sentinel" provides a last minute reprieve to the ultimate destruction. Explanations are in order.

Euan: "We were really pleased how it managed to fall into place so quickly. The theme has an anxious panicky feel to it and the mood we wanted to create actually worked perfectly.

"The Sentinel" is a kind of guardian angel who saves us from ourselves. It gathers together all the treasures, wisdom and culture and places the information into a massive computer. When the leaders reach out and press the button to nuke themselves nothing happens, the buttons don't work because the Sentinel has overruled them.

"The idea came around over an eight month period and we actually have about three albums'worth of material that could be written on that theme alone. Although we anticipated that the story will be completed at odd intervals and with irregular segments appearing at random. The ends will be tied up and new leads will be opened.

"Sure, it's fundamentally about the arms race but I personally find it depressing to see so much money spent on weapons when by right it should be used in other areas. However, our shows are different, we don't ram it down people's throats. The show is about having fun and enjoyment."

Enjoyment is a keyword with Euan. The man positively revels in the scenario conjured up by the grandiose stage design. His costume changes, although a little sloppy at present, enables several alter egos to run rampant with the Iyrical content not to mention his love of audience participation.

"It's a form of entertainment and somehow over the last five or six years a lot of bands, and the music press, seem to have forgotten that," states Graeme. "Today it's more a case of reporting that rock bands are angry young men making solid statements of intent. Honestly, if they want to be that angry, why don't they stand for Parliament. Why does a band have to preach about being a one in ten when they climb into the limo and shoot off back to the hotel after the gig? It's all a farce in those terms."

The Sentinel tour is Pallas's first venture into the larger concert halls and it's one they're doing with the financial clout that a show like this requires. Of the many special effects, the Infinity Tunnel" - got to be the most spectacular. A mirrored contraption that gives the effect of a never ending tunnel where Euan constantly appears and disappears throughout the performance.

Pallas may be a large step behind Marillion at present, but I've got a feeling that Fish and co. could be on the verge of a Iyrical tumble judging by the contents of "Fugazi". On the other hand Pallas have a potentially longer career in front of them. Whatever: progressive rock (if you really want labels) does have a future and does have something positive to offer. Forget preconceived opinions and take a peek with Pallas.